Not only do they differ in color, size, and the number of legs, when compared side by side they are nothing alike at all. Out of these two infamous home intruders, Silverfish are notorious for causing more damage due to its food preference. Hence the suggestion to seek professional help from extermination helpers to eliminate them from the house. With our guide, you will be able to understand the differences and know when to seek professional help.

Literally speaking, Centipede may actually mean ‘a hundred legs,’ but that is not the case in reality. Instead of a hundred legs, this creature only has 15 pairs of legs. These 30 legs definitely cannot be missed due to their unique build, however, the legs of female centipedes are oddly noteworthy. With two of their rear legs the size of their body length, you simply cannot mistake them when you see them!

Who would have thought that those spindly legs are actually incredibly extraordinary? They may look lanky however, it is easy to notice how tremendously unique and complicated they are the more time you see them. The Centipedes’ rear legs are always longer than the rest, and the closer to the head their legs are, the shorter they are.

Centipedes are known to be a creature that has the ability to run at the fastest possible speed without having to trip over the other pairs of legs. This surprising fact does not necessarily mean those legs did not come with a downside, due to their thin and lanky design, these legs are easy to break. Fortunately for these invaders, they will regrow in a few months.

Without eyes and noses, Centipedes rely on their long antennae making it highly functional. Yes, they can be used to smell and better yet, to feel their surrounding as they walk around. Its unique attributes are not restricted to that, surprisingly their legs also sport another functionality. The Centipedes’ front legs are also known as forcipules, with their pincer shape, Centipedes use it to sting when needed. Not only that, but it’s also with powerful venom that can quickly kill their prey such as wasps.

House Centipede was originally found in the Mediterranean, it’s not known how and when exactly did they make their way around the world. However, like the Silverfish, the House Centipedes thrive off the warmth found in the human habitat. Many homeowners may complain or get disgusted when they found them, but they actually offer something in return! Yes, due to their food preferences, they eat wasps and insects found in your house, which benefits you in the long run! 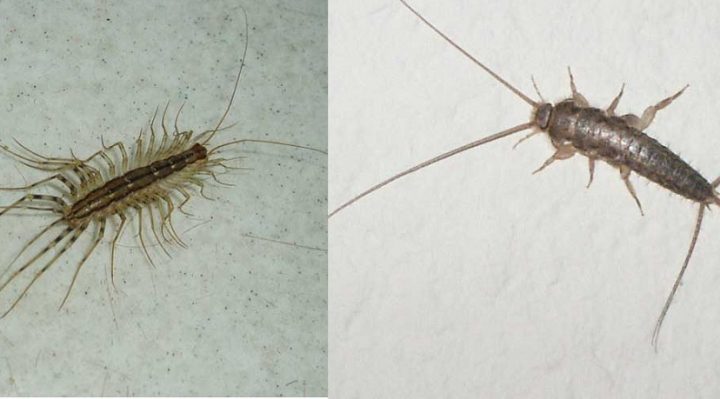 Next on the house centipede vs silverfish difference guide is the Silverfish. Despite the disgust and dislike that many homeowners harbor upon them, Silverfish is incredibly harmless. Named after their silver-gray color, Silverfish is often mistaken for House Centipedes despite their obvious differences. These tiny creatures are sporting long appendages with each of them the length of their body. Silverfish come in a variety of sizes ranging between one-quarter inch long to one and a half-inch long.

One of the most unique things about their attributes is the fact that, unlike House Centipedes, the Silverfish own two antennae. Not only that, these tiny home intruders also have three bristles on their abdominal area. Another difference between the Silverfish and House Centipede is the fact that they have an oval-shaped built. Despite the scales covering their bodies, Silverfish’s flat body is actually soft.

Being a nocturnal creature, homeowners rarely bump into them. However, if you are tempted to get a thorough scan of your house, check the most humid area of the house. Yes, Silverfish indeed live in a humid and damp condition so places such as the niches of your kitchen, the basement, and attics are the perfect place. Not only that crevices and corners of the house and furniture often become their favorite hiding and living space.

One thing that is incredibly mind-blowing is the fact that Silverfish was initially found more than 300 million years ago. Unlike House Centipede, these creatures feed on any form of carbohydrates and it does not matter whether it’s starch or sugar. Pasta, dessert, bread, rice, and even flour! Everything, as long as it has a high carbohydrate content, they will have it.

But who would have thought that their eating habit would stop there? Yes, Silverfish will move onto other sources of food such as fabrics, papers, and even glue! This is a nightmare for us homeowners since this means they also prey on our precious belongings such as clothes and books. If you would like to be more impressed, wait until you hear the fact that they also feed on their own exoskeletons.

Despite their unbelievable eating habit, Silverfish is found to be able to go on living without food whatsoever. Even when food is scarce, these tiny intruders have longer life expectancy than its House Centipede counterparts. When it comes to procreating, this ancient insect has a unique ritual that does not involve copulating, making them different in nature. 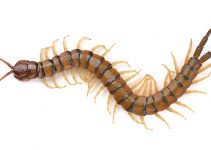 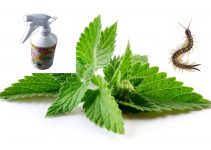