Before you learn about how to get rid of Boxelder bugs, you need to understand the basic facts and the bugs nature. Some people mistake it for a ladybird for a short glimpse, but the two insects are different. If you suspect the bugs’ infestation is happening in your house and your property, then you need to figure out how to deal with them efficiently – without overwhelming yourself.

The name Boxelder bugs are taken from the seed-bearing and maple Boxelder tree where the bugs often reside. They like to feed and then lay the eggs on the trees when it is warm. When fall comes, start becoming annoying since they will seek shelter and places to stay during winter months.

They like to gather in warm spots and then migrate indoors within insulated crevices and cracks in winter. The bugs generally become a huge nuisance during seasonal changes because they will invade new spots in huge numbers. 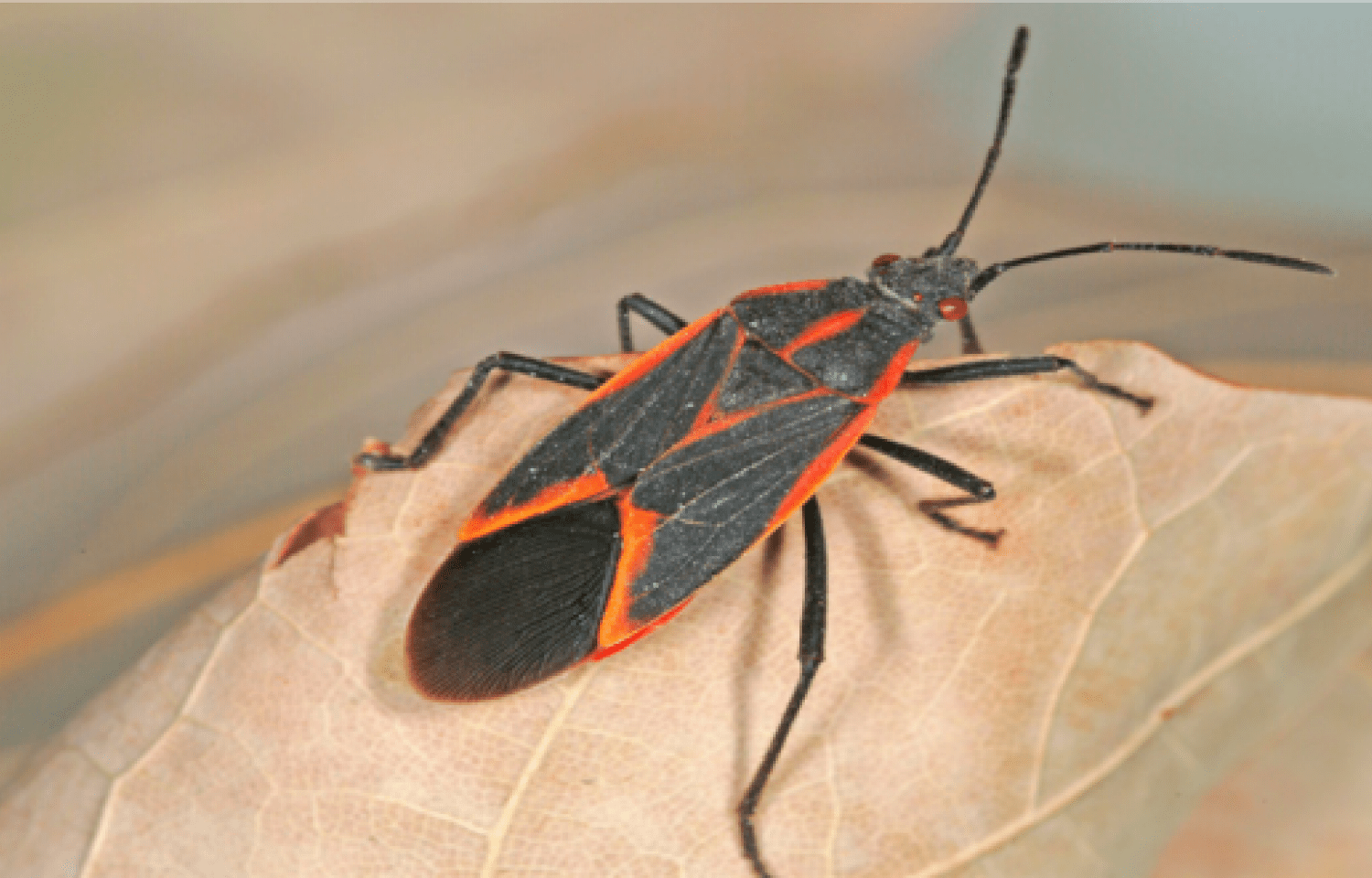 In terms of appearance, the insects have a black body with orange or reddish marks on the back. The insects have two antenna and six legs, with a body shape looking like an elongated and somehow flattened oval shape – measuring ½ inch in length.

The insects are native to the western area of the United States. However, you can easily find them on the eastern side of Canada to the eastern part of America, and also on the western side of eastern Nevada. Those are the areas where Boxelder trees can be found. Where do Boxelder bugs nest? On warmer periods, they like to feed and nest on the host trees. When the temperature starts dropping (during the colder months), they will migrate indoor and then they will hibernate during springtime. It’s a repeating cycle.

The Boxelder bugs aren’t destructive or dangerous. They simply are annoying when they are gathering and moving in large numbers. If you can prevent them from gathering around, then you won’t have to worry about their infestation. But if a large number of infestations already takes place, then knowing how to get rid of Boxelder bugs can help you deal with the problem.

Despite their naturally harmless nature, their piercing-sucking mouthparts can puncture the skin, which leads to irritation and mosquito-bite look-alike reddish spots. When you crush them roughly (or when you treat them in a rather rough manner), they may produce an unpleasant and strong odor. Not to mention that their fecal matter will leave an orange-reddish stain on fabric, leading to its discoloration.

What attracts Boxelder bugs? They are deeply attracted to the trees. The bugs would mainly eat the newly developing leaves and the tree seeds (female). They also like apple fruits or plum. And they dislike cold, which leads them to gather around on warm buildings, trees, and rocks where the sunray is plentiful.

How to Get Rid of Boxelder Bugs without Chemicals Permanently

How to Get Rid of Boxelder Bugs

So, how to get rid of Boxelder bugs? It’s a good thing that there are several possible actions that you can do. None of these methods involve dangerous or toxic chemicals, so you won’t have to worry about it.

The simple mix is lethal for the bugs – and it is considered repulsive by the others. You only need to mix water and some drops of the dish soap – a tablespoon would be enough. Put the mix in a spray bottle. Whenever you see the bugs clustered together in a big number, spray them with the mixture.

This method will work in two ways: it can kill some bugs. And the bugs hate the mix, so they will clear out. Insects breathe through their skin. When you saturate them with the soap dish mix, their skin will be blocked (by the mix) and they won’t be able to breathe. Not only they hate the smell, but they also hate the effect for them. You don’t have to squash the squirming insects – they will die on their own.

Simply remove the dead bodies by scooping them. Make sure to dispose of them in the outdoor trash bin. It would be wise to have several spray bottles around, especially close to the areas where they are highly likely gathering.

When the insects are dead, make sure to get rid of their bodies as soon as possible. Their dead bodies are possibly attracting Dermestid Beetles, which can lead to another bugs infestation. You can use the vacuum cleaner to remove them. Never store them – dispose of the bags right away.

As it was mentioned before, these insects like heat-reflective and warm surfaces where they can soak the heat up. After they have spent enough time on those surfaces, then they will go inside (the building) to nest. Make use of your dish soap mix to clean up the gathering’s surface with either scented cleaning products or soapy water. Both of them can repel the insects – they won’t want to come back to the same spot again.

One effective way on how to get rid of Boxelder bugs without hurting them is by using a vacuum cleaner. Vacuuming the insects is more advisable than crushing them. Remember the foul odor? Not only it is quite annoying for you, but it will also attract other Boxelders bugs – and also other insects.

Whenever you see their swarm, pick your vacuum cleaner right away and suck them up. Once you are done, throw the bag immediately so they won’t crawl out and explore your house. When you throw the bag, make sure to do it far away from the house.

For the best outcome for this method, combine vacuum and soapy water. After you have vacuumed them up, clean the spot with the soapy water to remove their smell or pheromone. It will prevent other Boxelder bugs (and also other insects) from coming to the area. It would be wise if you have some portable vacuum cleaners handy, especially if your areas are prone to such insects’ infestation.

Close and Seal Any Opening

When the bugs are gathering, they will push each other so each of them can fill into cracks and gaps of their spots. When they are already inside, they will follow the trace of the heat until they are finally inside a building – in this case, your house.

If you can perform a thorough inspection around the house and find their gaps (where they push through), you can cut off their entry points to your house. Start from the door frames and also window frames. If you see any gaps or cracks, you can always seal them up with caulk. You may want to choose the premium silicone caulk or the good quality silicone-latex caulk. The result won’t be disappointing.

If you have more money and you can spend them on home improvement products to promote permanent seal, then do it. Remember, they are insects, which means that they are small enough to fit in any smallest cracks. Checking your house (and its perimeter) may take time, but if you can seal their entry points, you won’t have to worry about their infestation anymore.

Replace or Seal the Cover Plates

Do you remember that these bugs love heat so much? They often end up residing and nesting in (or close to) the return air vents, heating ducts, switch boxes, and electrical outlets. And since they have flattened body, they can squeeze under the plates – even those that are a bit out of place. One way of how to get rid of Boxelder bugs is to prevent them from feeling comfortable at your house and then making a nest inside.

Check for their existence around the outlets and vents. Even if you see one, you need to take off the fixture right away. You don’t want the remaining to hide inside. If you find any bugs, vacuum them. Then clean the vents and seal them – and then you can replace them. If you find out that the plate or the vent isn’t properly sitting, then it means that it isn’t. You should think about replacing any cover plates or vent covers that don’t fit with the housing correctly.

Trim or Remove the Boxelder Trees

Removing the trees may seem like an extreme and dramatic action, but you need to admit that it is pretty effective. The trees produce the so-called helicopter seed pods that are attracting the insects. If you can’t remove the trees entirely, then you should think about trimming the trees regularly. Rake up or mow the seed pods – keep in mind that they often fall. Make sure to reduce the cover sites between the house and the tree. When the Boxelder insects aren’t comfortable in your property, then they won’t want to stay longer.

In most cases, Boxelder insects like to hide. They like to do it close to the ceilings, in attics, and in the basement. You can always buy the insect trap, such as a light trap or glue trap, which will lure the insects and capture them. Check the traps regularly and throw away the traps immediately before they produce an unpleasant smell. Don’t forget to throw them out in faraway spots from your house.

This may not the most effective way on how to get rid of Boxelder bugs but it can quite efficient in preventing and discouraging the swarm’s growth. By using your garden hose (and water), you can always break up the bugs’ cluster. Be advised that it won’t reduce the population or kill them. It only provides a temporary solution and it is most efficient for small clusters.

The powdery form of microalgae’s (fossilized) remains is available in the food-grade type as well as the toxic one. The safest type is the food-grade one, which can be purchased in the garden and home centers. It is safe for pets and humans and yet lethal for the bugs. You can scatter the powder around the potential spots, including the tree base. Don’t forget to wear a dust mask, safety glasses, and safety gloves. Don’t use your bare hands – use a scoop instead.

Those are your solutions to deal with the insects. You simply choose one among these methods of how to get rid of Boxelder bugs. 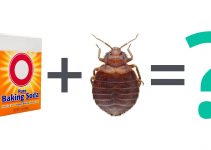